Alignment technology has become so accurate, portable, efficient, and interactive, that the number of applications in which calibration and leveling tasks can be done quickly or in real time has exploded, with the potential for enormous benefits, including saving lives.

Using Warren-Knight technology, such as NASA did on its Space Station surfaces, W-K products can aid Structural Engineers in predicting and preventing catastrophic failure. Level sensors (WK-34-3340) in conjunction with the Hand Held Level (WK-34-2300) can be used on structures such as bridges to detect shifting and vibrations. Had this technology been used on the I-35W bridge over the Mississippi in Minneapolis, 13 lives might have been spared, and billions saved in lost productivity.

In designing alignment systems, such instruments are able to detect alignment shifts as slight as the tremor caused by a passing truck. Uses for some of this state-of-the-art technology include monitoring dams for distortions that can be caused by base erosion— measuring to arc seconds the amount of sway a building experiences in wind and in the event of earthquakes, providing design engineers with rapid, pinpoint accuracy.

A good deal of the problem solving at Warren-Knight involves military applications. From systems which calibrate the boresights on a Bradley Fighting Vehicle, to making sure the components of sensitive radar systems are manufactured, installed and aligned to critical tolerances.

In assembling the AWACS (Airborne Warning & Control System) radar pod, for example, W-K equipment is used to make sure the support struts inside the rotating discs are manufactured to exacting angle specifications.

In the noses of jet fighters, W-K systems are used to make sure that the radar array is seated in the correct position relative to the rest of the aircraft.

On naval vessels, the Warren-Knight shipboard alignment system integrated in real-time, gathers readings from several points on the vessel to determine whether the ship itself is in alignment from stem to stern. It also determines whether the weapons platforms, radars, and other components are in alignment with the vessel. This is done to make sure that the ordinance is delivered accurately on target.

New industrial technologies require ever increasing alignment accuracies. The emerging wind-energy industry uses equipment such as the Electronic Levels to make sure that the huge (150-foot long) blades they make are uniformly shaped for balance and maximum generation efficiency.

“Anytime you need to check the relationship between two surfaces, whether it’s a propeller blade angle to itself, or a ship drive shaft to the vessel’s center line, we are manufacturing unique solutions to unique problems”, says Rick Marron, Warren-Knight’s Special Product Sales Manager.

Marron says some projects become more complex when the surfaces to be aligned are oddly shaped or the materials are too sensitive, such as airframe surfaces, to have measuring devices attached directly to them. He explains: [quote align=”center” color=”#999999″]In these cases, the extra step is designing jigs which are precisely fabricated out of stable temperature-resistant materials. The jigs fit the shape of a surface tightly and are designed to attach an alignment device repeatedly with no variation.[/quote] 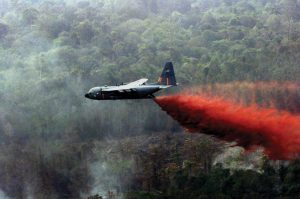 One of the more unusual problems Warren-Knight has provided solutions for, is helping track wind patterns for forest firefighters, weather forecasters, scientists tracking crop-destroying insect migrations and pollution, and for hot air balloon pilots to ‘steer’ to landing spots.

Rick Marron states: “Wind directions and speeds change as you move up from the ground into the atmospheric column. This is a major consideration for fighting forest fires, where wind direction anomalies become even more pronounced when distorted by micro-climates caused by heat.

[quote align=”center” color=”#999999″] Knowing what direction the wind is blowing is crucial in deciding where to deploy manpower, when to extract personnel who may be in the path of a fast-moving fire line, and especially when directing aircraft to drop water and fire suppressants on target, so they won’t blow away and become ineffective.[/quote]

Marron explains that Doppler radars and other resonance technologies are unable to detect these micro-conditions with sufficient accuracy, so balloons remain the most accurate way to track wind shifts. The new generation of theodolites have a refined optical clarity that makes it much easier to track balloons when they reach high altitudes. The software has become sophisticated enough to be able to digest and intercept the incoming data so quickly that hot air balloon contest organizers employ it to help guide balloonists as they steer through the wind layers to try to set their baskets down on target.