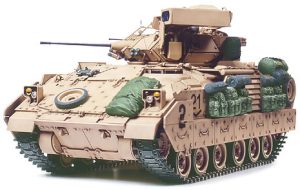 The Bradley Fighting Vehicle is an essential tool for America’s ground troops in Iraq and Afghanistan.

BAE Systems of York, Pennsylvania was awarded a contract worth over one billion dollars from the U.S. Army TACOM Life Cycle Management Command for refurbishing 1,042 Bradley Fighting Vehicles that have served in Iraq.

Vehicles go through an intensive make-over after combat operations under some of the harshest conditions on earth. Seeing that American troops have their highly survivable, mobile and lethal Bradley systems back in top condition as soon as possible is vital to achieving the mission.

BAE is a leading defense contractor that has developed a rapid, efficient process to refurbish used Bradleys so they can be returned to service with minimum downtime.
Except for one stubborn bottleneck.

Aligning the gun sight with the Bradley’s main weapon, the M242 25 mm chain gun, was taking so long the process was slowing deliveries. BAE employed a technique that has been in continuous use since World War Two and works fine except that for BAE’s purposes it was proving to be cumbersome and time-consuming.

The system features two arc-shaped towers, each about 40 feet tall, fitted with an array of collimators, concave mirrors at which a telescope is aimed, in this case from inside the tank through the barrel and simultaneously from the mounting platform for the sighting unit. Optical collimators are also used to calibrate binoculars, another device where two sightlines must meet. The process of calibrating the weapons platform required removing the turret and then adjusting the pitch and yaw of the fire control mounting plate to align with the main gun’s optical system. There are a series of six (yes?) collimators to test different levels and angles of attack. Rick Marron, Warren-Knight’s Special Product Sales Manager, “It has a collection of motor drives that allow you to tilt the angle as necessary so that it precisely matches the pitch, roll, and yaw of the upward and downward movement of that gun.”

BAE’s problem was that it could refit the vehicles faster than it could calibrate the weapons system, the final stage of the process. The company had only two stations that could align the gun sights, and it was trying to find an alternative to having to invest millions to purchase and set up additional stations. The engineers at BAE explored using a Swiss-made angle sensor to align the sight plate. It was a step in the right direction, but the angle sensor could not detect yaw in the sight mounting plate. The Swiss company’s rep told BAE, [quote align=”center” color=”#999999″]We can’t solve the problems, but we know someone who can: Warren-Knight.[/quote]

1. Prepare a white paper exploring the engineering
of the technology.

2. Prepare a report on the recommended technology
for a prototype concept, called a protocept.

[quote align=”center” color=”#999999″]We started out with a concept to strike a laser beam to the collimator towers. But crunching the numbers
revealed too many flaws and inaccuracies.[/quote] 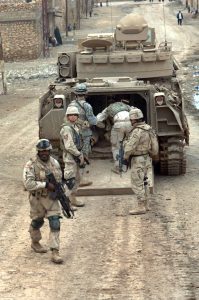 “Creative problem solving begins with looking at every possible way of doing something,” says John Henry Warren, President. “The most apt metaphor is that there are many ways to change a tire. You can use a jack or a lift. You can jack up the back of the car. You can jack up the front and maybe the back wheel will come off the ground. You can take the wheel off with a torch. You could flip the car over. “In this case, we asked ourselves, ‘Instead of aligning the plate from outside the vehicle, could we do it from inside?” Warren climbed into one of the Bradleys at the plant, looked around, and had an epiphany when he noticed that the mounting plate had a connecting piece that entered the interior of the vehicle. In effect, it was possible to measure the angle of the mounting plate from inside, as well as the angle of the gun barrel. The details are classified, but the system Warren-Knight came up with employs mirrors plus a camera, telescope, and electronic angle sensor.

“In a sense this was a low-tech process,” says Warren. “All it required was a set of eyeballs and a willingness to look through what was thought to be the wrong end of the telescope. We weren’t called in the reinvent the process of calibrating the Bradley, but that’s what we ended up doing.” The solution yielded unexpected benefits in addition to speeding up delivery times and making it the calibration process less cumbersome and costly. The system Warren developed turned out to be highly portable, allowing calibration in the field as well.

[quote align=”center” color=”#999999″]Many engineers will look at a problem and say, ‘That’s the only way you can do it.’ People get married to their ideas. Sometimes you need a fresh set of eyes and ears to come in, and instead of talking, listen, and instead of assuming, observe.[/quote]