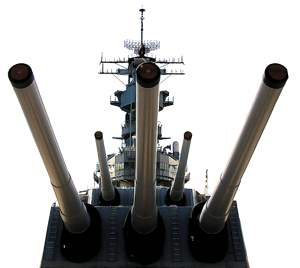 Increase the accuracy of naval weapons

Technology has so transformed modern naval warfare that when a ship fires on an enemy vessel, the target can quickly locate the source and return fire with deadly accuracy. You may not get a second chance at a first strike.  The navy of a major U.S. ally in the Eastern hemisphere was struggling with the accuracy of its bore sight systems and needed a fix. What they got was a whole new way of putting ordnance on target.

The history of the Eastern hemisphere is riddled with political fault lines that periodically erupt in armed conflict. What’s changed in the past two decades is the rapid development of sophisticated weapons systems, and any nation’s armed forces that fail to keep up risk being caught flat-footed.

The navy of a major U.S. ally in the region had just such a problem. The system they were using to check the accuracy of their big naval guns was proving unreliable. Big guns on a constantly-moving platform such as a ship need to be checked often, especially after they’ve been fired enough times to cause wear and tear on the barrels and turret mounting plates.

Long gone are the days of “fire for test,” when a ranging round could be lobbed and there would be time to make adjustments and “walk” successive rounds onto the target. Today’s modern ships have the ability to track enemy vessels, tell precisely where those incoming rounds are originating, and quickly return fire with punishing accuracy. 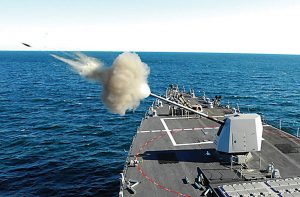 Warren-Knight was called upon to help our ally develop a
bore-sight calibration system to replace one that was flawed. Warren fabricated a mandrel (a device placed in the muzzle of the barrel) that had a video camera embedded in it so the fire control crew could see what the gun was pointed at and synchronize it with optical and other systems.
In the process, Warren’s team discovered that the navy was using a low-tech method of calibrating gun positions within the matrix of the ship itself. In use since World War II, the method involved a fixed inclinometer (clinometer for short) below decks amidship, and an unfixed second one that was placed during refurbishing on the exposed plate under the turret, with the turret removed.
A crewman at the below-decks centerpoint communicates with a second crewman at the turret plate (called the roller path) in a time-consuming process of calling out marks based on bubble readings of pitch, yaw, and sway. The goal is to make sure the gun’s mount is synchronized with the master clinometer. The procedure must be done late at night to avoid hull distortions caused by the heat of the sun; at a time when harbor traffic and wave action is at a minimum; and when shipboard activity has quieted down.

One might think that aligning a ship and its weapons could be done more easily in drydock but it turns out that a ship out of water experiences another kind of distortion in the absence of the normal pressures caused by the sea against the hull.

[quote align=”center” color=”#999999″] We were working with the navy on the boresight problem and learned that they were using the traditional method to synchronize elements of the ship (guns, radars, gyros, etc.) with the master inclinometer belowdecks. We had been working for some years on developing a better system and we suggested putting together a high-tech arrangement that would make the task easier, faster and more accurate.[/quote] 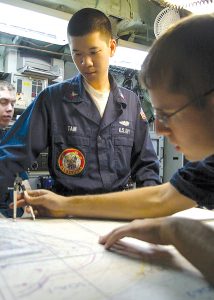 Details are classified, but instead of two crewmen calling out marks on the clinometers, Warren employed software that allowed a number of clinometers placed throughout the ship to be linked together to a central computer. Simultaneous readings from critical points on the ship could then be measured against the master clinometer and adjustments to roller paths and other mounting plates could be made with much less manpower, and to tolerances of within ±10 arc seconds.

The system has been further enhanced by feeding in readings from a theodolite, an optical device used to measure the stem-to-stern alignment of a ship to check for warping that may be caused by repeated firings of powerful guns.

“It’s not unusual for us to start out trying to solve one problem and end up solving another,” says J. Henry Warren, president of Warren-Knight.

[quote align=”center” color=”#999999″] In the case of the bore sighting issue, we did it by asking a simple question: ‘By the way, what are you doing for ship-board alignment?’[/quote]